Where To Install Smoke Detectors In Your Home 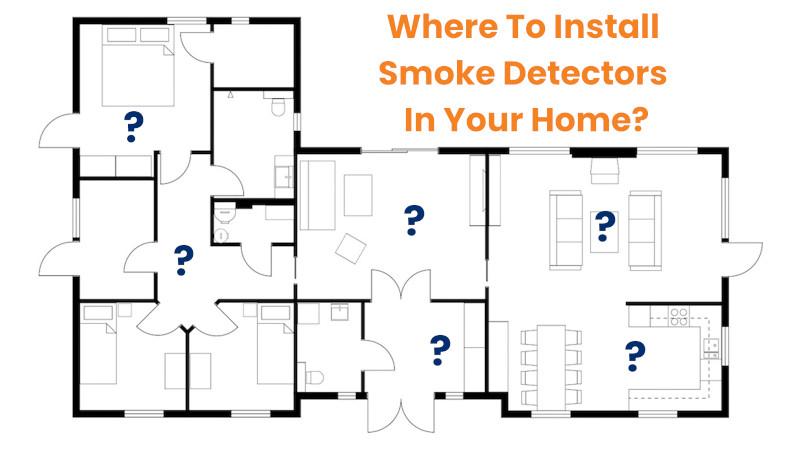 Smoke Detectors Along Escape Route Out Of Home

So what if smoke fills up escape route, you may ask? Here are some stats about smoke that you may not be aware of:

Dead air space are areas where it traps air and prevents smoke detectors detecting smoke. In a fire, smoke travels by rising up the surface of walls. If it meets a sharp turning point, it will not rise to the turning point as there’s trapped air. It will instead roll on top of that pocket of trapped air. A smoke detector mounted within the dead air space will not trigger since smoke doesn’t reach it.

There are many definitions to how large the dead air space is where the wall meets the ceiling. NFPA defines the space 10cm from the edge as dead air space. We should never install any smoke detectors in this area.

Take the room below as an example.

For rooms with sloped or pointed ceilings, we should install smoke detectors 10 cm from the top.

Can Smoke Detectors Be Wall Mounted?

Smoke always rises and spreads out upon hitting a barrier such as a ceiling. A smoke detector, on the ceiling, will be able to detect the spread-out smoke and sound off the alarm. Hence ceiling is always the best location.
A wall mounted smoke detector will need to wait for smoke to fill up the entire ceiling. This is less ideal since there will be delay in warning. But in situations where it is not practical to ceiling mount (eg very high ceilings), wall mount is an option.

Other Areas To Avoid For Smoke Detectors

Now we know we should install smoke detectors along escape route and never in the dead air space. Are there any areas that we should take note of?

Yes, of course! We also want to avoid locations of the following:

It is also worth noting the following::

And here’s a self-served tool to help you get a quick recommendation of the least number of smoke detectors you need in your home.