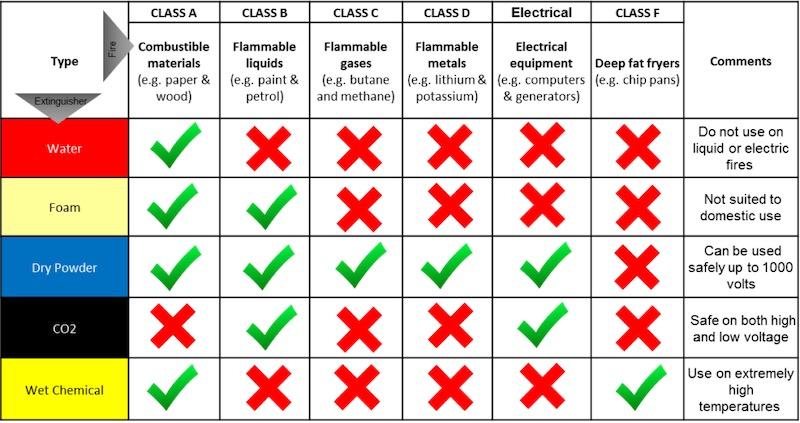 Broadly speaking, there are 5 types of fire extinguishers, namely:

Each type of fire extinguisher fights against different types of fire , as illustrated in the diagram below.

CO2 extinguishers are ideal for places with a lot of electrical equipment such as offices or server rooms because they are safe to use on fires involving electrical apparatus. Carbon dioxide extinguishers do not leave any residue, unlike a foam extinguisher. They can also be used on Class B fires, those involving flammable liquids such paraffin or petrol. CO2 extinguishers work by smothering the fire and cutting off the supply of air.
Carbon Dioxide Extinguishers (CO2) have a black label.

Wet chemical extinguishers are suitable for use on Class F fires involving cooking oils and fats, such as lard, olive oil, sunflower oil, maize oil and butter. They are extremely effective, when used correctly. The wet chemical rapidly knocks the flames out, cools the burning oil and chemically reacts to form a soap-like solution, sealing the surface and preventing re-ignition. Although they are primarily designed for use on Class F fires, cooking oils and deep fat fryers. They can also be used on Class A fires (wood, paper and fabrics) and Class B fires (flammable liquids).
Wet chemical extinguishers have a yellow label.

Our Series of Extinguishing Devices